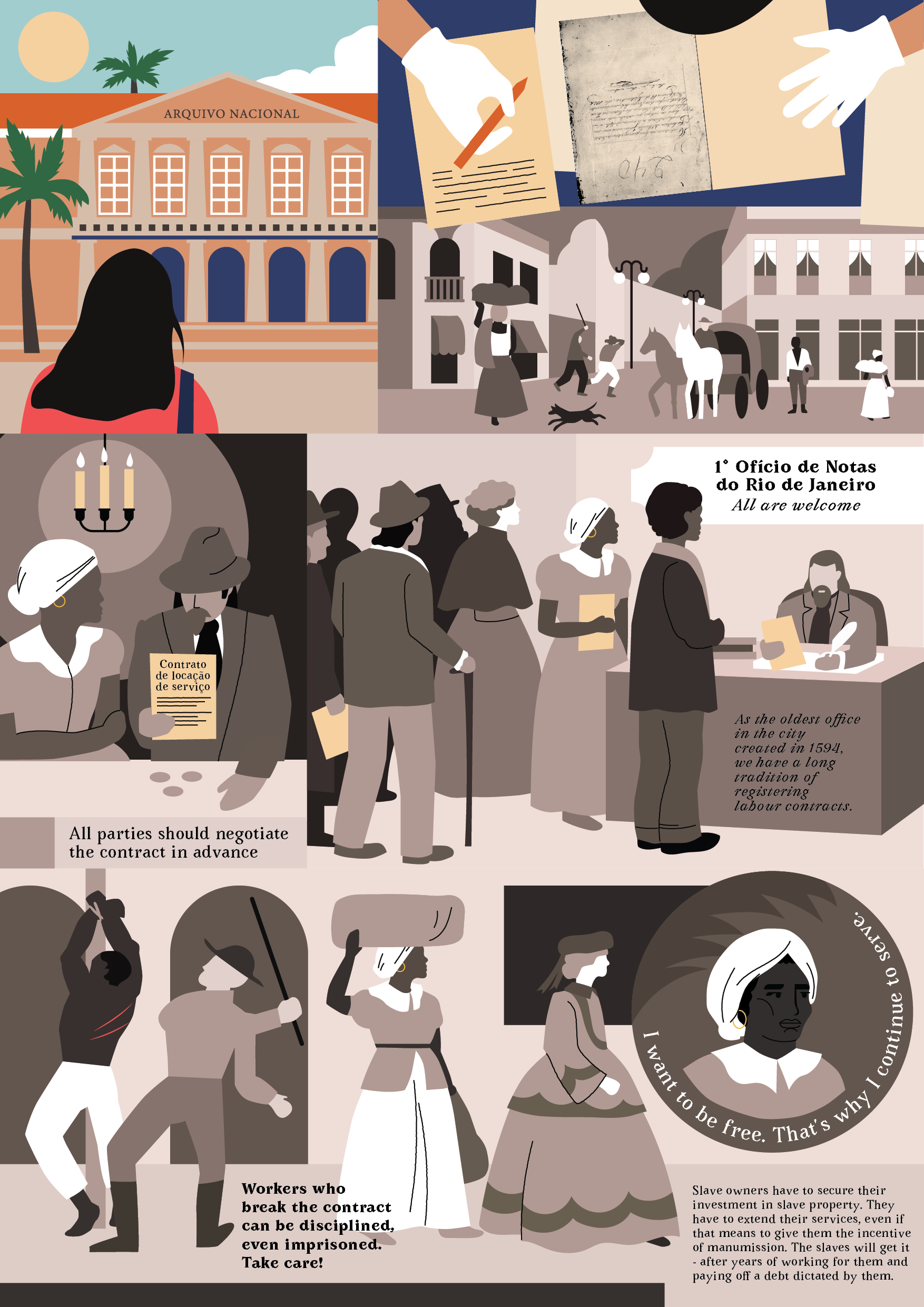 Even when performing similar works under very similar social conditions, free and freed, national and foreign workers were still considered under different legal statuses and submitted to diverse regimes of contract rules in the plural legal order of 19th-century Brazil. Designed to facilitate the loudly requested ‘substitution’ of slave labor by free labour, the first attempts of regulating labour contracts in the immediate post-Independence era (1822-) were a clear expression of the legal conviction that the universes of freedom and compulsion had no overlap. While this view of a clear-cut division among labourers along legal status remains powerful in the legal literature, a deep dive into the empirical world of notary offices displays a much more complex panorama where neither contracts nor wages were definitive features of one kind of labour relationship rather than another. Sometimes separated by no more than a page in a notarial book and using the same legal language, free and freed workers performed concrete labor negotiations that demonstrate the close proximity of spaces of autonomy and logics of coercion. Using the notarial records of Rio de Janeiro as its main scenario, this chapter aims to revise the usually static legal understanding of labour relations. It explores how remuneration, contract, and coercion dovetailed and manifested themselves in the multicolored spectrum of the Brazilian labor landscape.

Nico Pizzolato: “From peonage to contract labour: Connecting the dots in the history of debt and coercion in the
United States”

In this visual essay that combines images and writing, a historian and a visual artist tell the story of how historical research has unearthed evidence that points to an enduring connection between debt and coercion in the history of labour in 20th century United States. In the United States, debt, both in its material and symbolic aspect, functioned as a key instrument of coercion to perpetuate forms of subjection after the abolition of formal slavery. The post-Emancipation shift to contract and waged labour in the so-called Black Belt and its later diffusion in areas of agricultural expansion such as California and Florida created, ironically, new opportunities for coercion. Employers created, manipulated or simply benefitted from workers’ indebtedness to cut labour costs, control mobility and perpetuate racialised hierarchical relations. When, in the post-war period, immigrant workers from Central America replaced African-Americans as the core of the agricultural labour force, they often arrived as contract workers or undocumented who were bound to their American employers by debts that they had incurred during the immigration process and that were magnified by management strategies. This visual essay is characterised by a high-level of reflexivity about the process of conducting an historical investigation on themes so close to us, yet at the margin of both public history and mainstream visual culture. 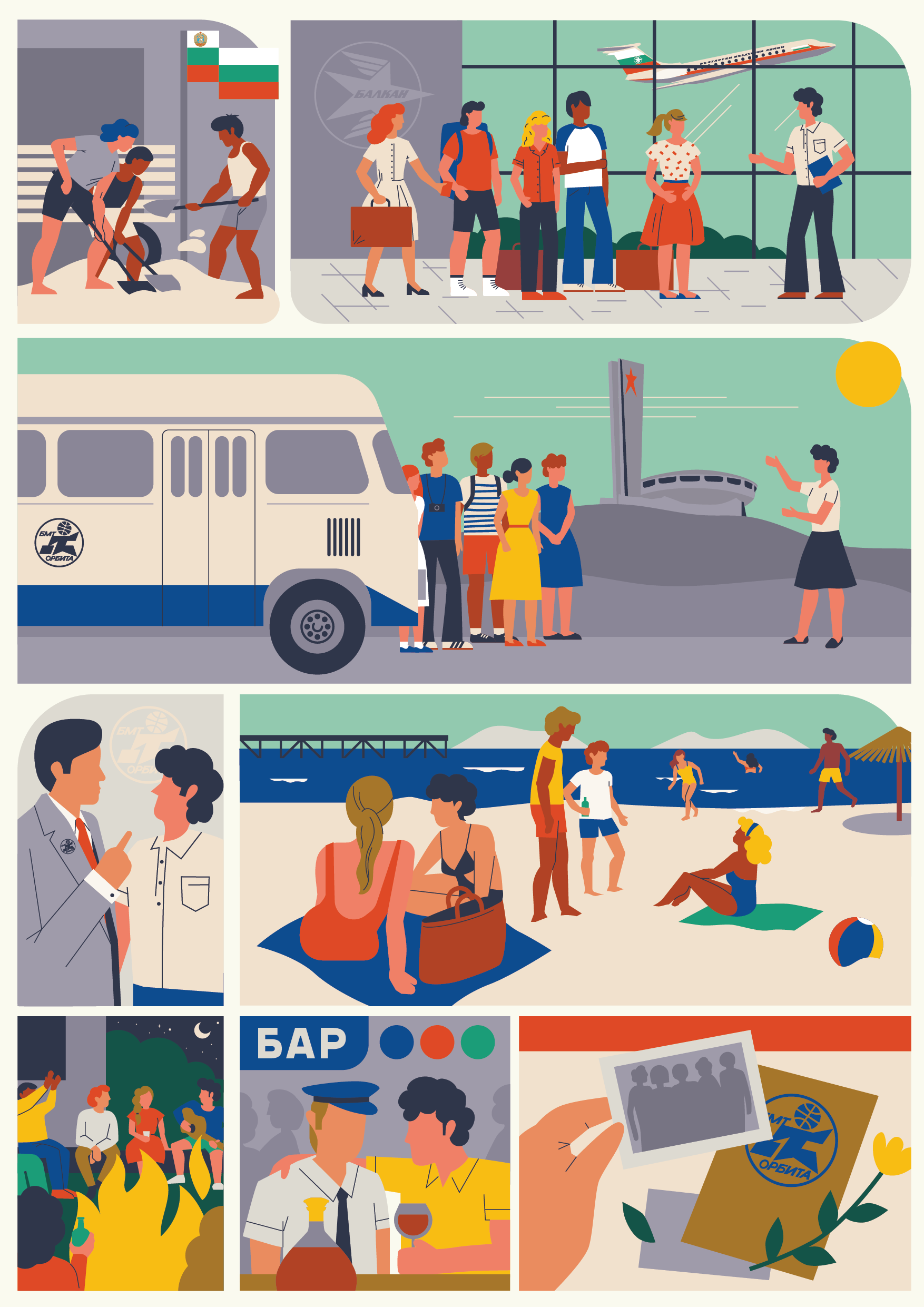 An important part of state policy in socialist Bulgaria was the temporary forced engagement of students from high schools and universities as a workforce in various sectors of the economy. During the summer months, youth ‘labour brigades’ were formed as a compulsory form of unskilled work, through which physical labor was provided and young intelligentsia was temporarily put into the working-class position. Participation in the brigade was a prerequisite for continuing education in the next academic year. This labour coercion in non-teaching months was in line with the prevailing socialist ideology of imposing total control over all spheres of public and private life. Besides this physical work, a smaller, selected, group of students were employed as seasonal guides for foreign tourist groups. This form of labour was recognised as an equivalent to the participation in a brigade but it was not unskilled work. Based on the use of acquired language skills, and following an entrance test and several weeks of training and exams, the young guides received remuneration and were not confronted with
physical force. With the core of this study being the “Orbita” Youth Travel Bureau, founded in 1958, this chapter sets out to explore if, why, and how the young students employed as tourist guides perceived this type of seasonal work as a form of labour coercion. Based on archival material and biographical interviews with former guides, it presents the working norms and obligations of the Bureau, their application, and the students’ labour practices and perceptions thereof. 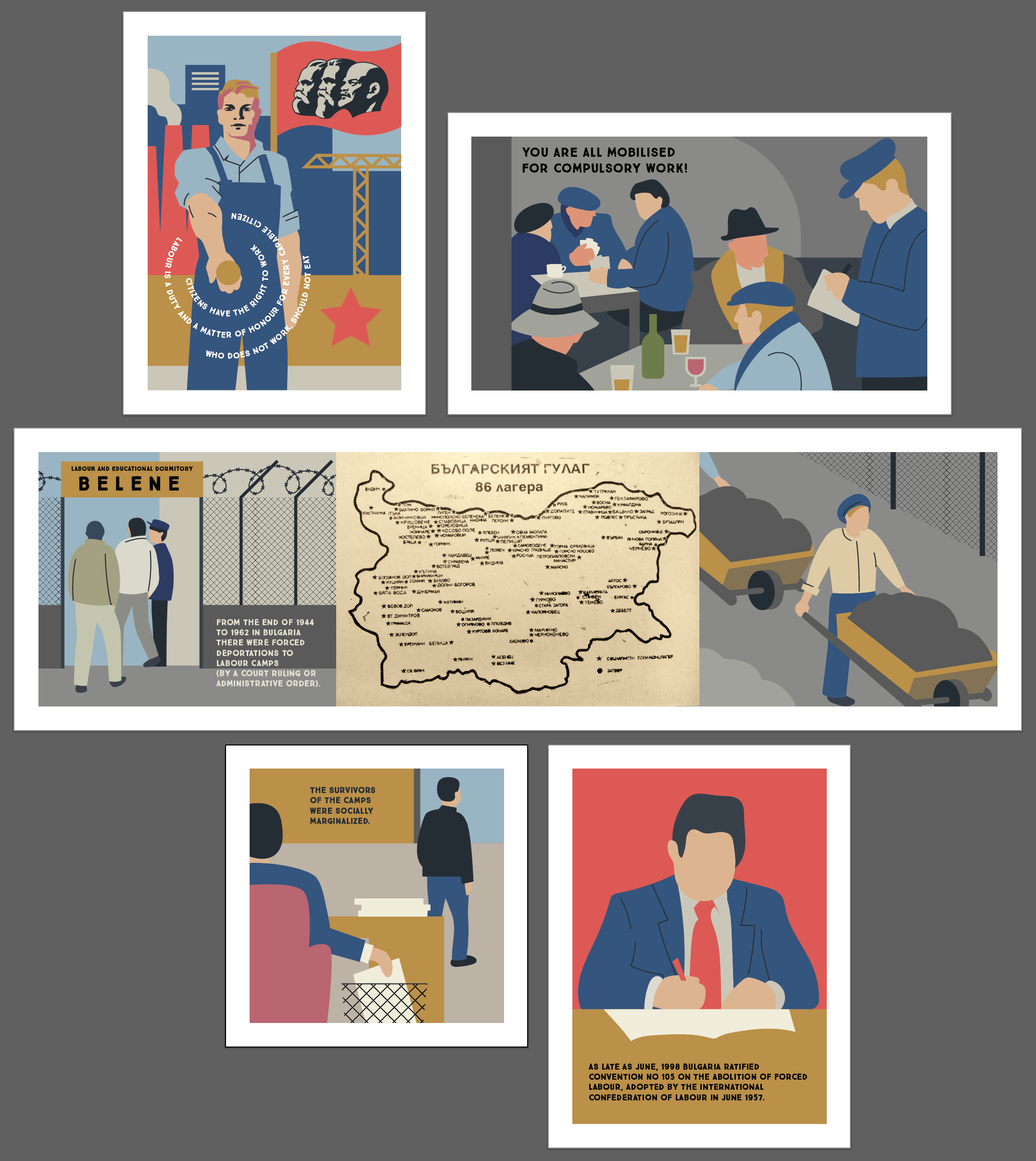 The slogan of ‘freedom,’ i.e. labour liberated from exploitation, dominated the public discourse of Bulgarian society in the first postwar decades. During the whole state socialist period (1944-1989), the pathos of free socialist labour did, however, not exclude the idea of coercion in work. Indeed, there existed a variety of official forms of coercion: forced labour in labour camps, labour troops as an alternative military service, and brigades. This chapter discusses the presence of the concepts of freedom and coercion in the public discourse during state socialism and their thematisation in autobiographical narratives. It stresses the gap between the public discourse framed
around class-party-ideology and the experienced realities, and moves to the forefront the internalization of the idea of ‘freedom’ and ‘free labour’ as well as public sensitivities and insensitivities to hidden and explicit forms of coercion in late socialist Bulgaria.

Add information about illustrator and link to her webiste 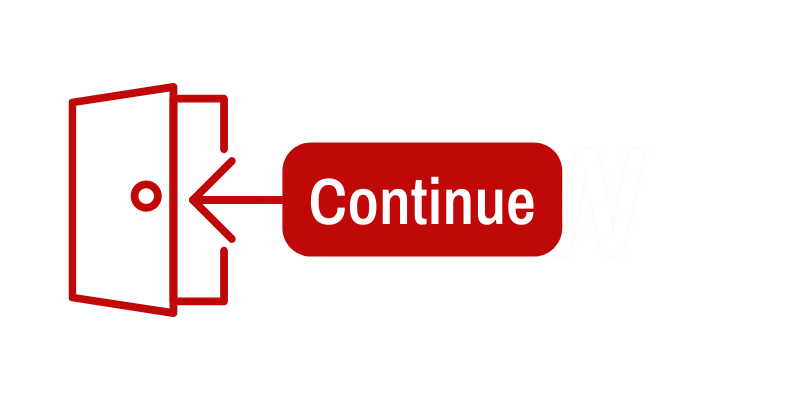