Journal of Global Slavery 5:2 – Special Issue on Modalities of Coercion and Shifting Labor and Power Relations 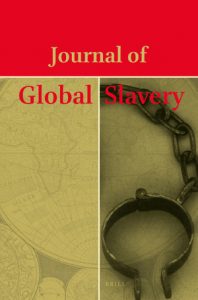 The Journal of Global Slavery has just released a special issue on modalities of coercion and shifting labor and power relations, guest-edited by Juliane SCHIEL and Christian G. DE VITO. The issue calls for a radical contextualisation of the history of the enslaved. It not only links their histories to those of other coerced laborers, but it also seeks to detect the modalities of coercion of the asymmetrical power relations that were at stake. By situating and comparing specific cases from different time periods and world regions, this special issue not only contributes to the study of slavery and current debates in global labor history — it may also help to conceptualize a new social history.

The volume contains first results from the COST network on «Worlds of Related Coercions in Work» (WORCK). It presents four case studies of specific social formations in which the status of the enslaved and the practice of enslavement underwent major modifications. The first article, by Juliane SCHIEL, examines late medieval Ragusa (today’s Dubrovnik), where unskilled migrant workers and captured people from the Slavic hinterlands were gradually absorbed by the increasing labor demand of the surrounding sea powers and the logics of a commodified maritime economy. The second article, by Claude CHEVALEYRE, is set in late imperial China, where more and more commoners started buying “adopted sons” and keeping them as slaves in order to bypass the rule of the Great Ming Code that had restricted the ownership of slaves to a small state elite. The third article, by Karsten VOSS† and Klaus WEBER, analyzes the period of the late 17th-century sugar revolutions, when the French Governor Jean-Baptiste du Casse aimed to make Saint-Domingue a lucrative colony, economically competitive with the neighboring British island of Jamaica. The final article, by Benedetta ROSSI, takes us to the vast hinterlands of Niger, where slavery has remained a living institution up to today.