The Covid-19 Crisis: a Change of the Political and Socio-Economic Paradigm in Europe?

The current emergency against COVID-19 represents the time to read and reread epidemics in history. The responses of European governments and other continents, the measures taken against the contagion, the narrative itself of how an epidemic spread and how it affects the society, represent themes for reflection and analysis.

The current emergency against COVID-19 represents the time to read and reread epidemics in history. The responses of European governments and other continents, the measures taken against the contagion, the narrative itself of how an epidemic spread and how it affects the society, represent themes for reflection and analysis.

The crisis that is emerging with increasing strength in recent weeks is a flywheel that leads us to ask ourselves more and more not only about how to deal with an epidemic, but also and above all how to rethink our lives. As historians, our goal is indeed the study of the past, but with the aim of also providing some answers regarding our present and the future of future generations.

So, this is important to think about the epidemics that have hit Europe (and beyond) during the modern and contemporary age and how they have profoundly shaped the society in a current perspective. Europe has an extensive experience in the fight against epidemics, as in the case of the plague that hit Europe several times between the Middle Age and the Early Modern age, and which killed every time an important part of the population of the old continent. Paradoxically, until a few centuries ago, epidemics could even benefit the economy of different European states. Due to the limited resources available and the extensive agriculture, whenever the population grew too much, there was a subsequent decline in the population – well described by the “Malthusian cycles” – due to the inability to feed too many people. Thus, sometimes, epidemics could help to balance the relationship between available resources and the population. But, besides this mostly economic reading, it is also good to think about how epidemics have restructured a society, sometimes even helping to destroy it – just think about the pre-Columbian societies largely destroyed by chicken pox, smallpox, syphilis etc. imported by the Europeans – but also to how they can represent a very strong form of social control. If Albert Camus’s “The Plague” seems to predict the restrictions to which we are obliged today, obviously useful to avoid the spread of COVID-19 and necessary to try to save as many lives as possible, it is also likely that this intervention in the life of citizens – so heavy on a social, economic, psychological level – can have consequences that will continue even when the emergency is over. The message that the media are constantly sending us, day after day, is that we will have to get used to these changes that can become “normal” for us. Thus, precisely through the use of recurring language and expressions, we get used to thinking and we are convinced that these changes in our life will be (in part) necessary even after the emergency is over. What is certain is that Europe has not experienced such an epidemic for over a century – the Spanish flu of 1918 – and that World War I was ending at the time, while now we live in a moment of peace and we don’t know what tomorrow we shall suffer for it. 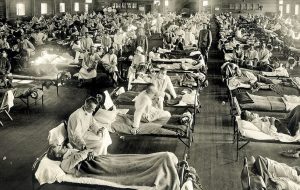 Certainly, our experience with COVID-19 makes us reflect on how there can be a before and after an epidemic, not only from the point of view of the emergency response and of the measures taken by European governments, but also from the point of view of standards and of the social practices we were used to. If, for example, smart working is opening up more and more, it would be at the same time desirable to ask how epidemics have shaped the societies of ancien régime. This undoubtedly represents a first level of reading, which must be accompanied by that of the mobility of people and migration, not only as a possible cause of an epidemic but also, possibly, as a consequence. The European experience with the various plagues that have affected it, but also the answers to avoid the possible spread of an epidemic, such as the quarantine and the Mediterranean sanitary cordons that already in the modern age were put in place by different political realities, represent another topic of the European experience in the fight against epidemics. This is accompanied, of course, by the theme of forced migrations of ethnic and religious minorities, which could represent a further cause for concern about the possible spread of diseases, just as the sale of slaves and cautivos in the Mediterranean was an additional element of strong mobility within the Mare Nostrum.

As already mentioned, the economic dimension is a further aspect to be underlined, since the great epidemics not only cut the lives of thousands or millions of people, they also damage trade, with economies that are closing more and more and, as in the case of COVID-19, with the GDP of the European countries undergoing a sharp drop. Indeed, already Bernardino Ramazzini (1633-1714), personal doctor of the Duke d’Este in Modena, in his treatise On the Diseases of the Artisans (De morbis artificum diatriba, 1700 and 1713), showed the formation of an awareness of the bond between disease and society, economically based. In other words, the consideration of the disease as something that goes beyond the individual dimension of its sufferers and produces social effects and effects on the wealth and power of the states. Just today, April 9, 2020, the Eurogroup will meet (virtually) to decide the future of Europe, in a session that will be among the most dramatic of ever. The lives of about 450 million people will be conditioned by the decisions taken in a common session by the European governments and which will determine the future of our continent in a top-down manner. In any case, the pandemic has already caused the collapse of European GDP and the risk is that of witnessing a much worse social crisis than that of 2008. Millions of European citizens will lose their jobs and the tools put in place until now – of the sanitary, economic and welfare state types – seem inadequate to guarantee a serious response to this systemic crisis. If the ultraliberal economic policies put in place after the 2008 recession have already proved inadequate to face that crisis, is it not necessary to think about a change in the political and socio-economic paradigm?